May 24, 2020
I took the IDRlabs.com 8 Values Political Test, and, much like most tests designed for unreflective responses, so as to get to the prejudices of a person, I was frustrated on these psychological goals as an educator and a researcher. Many of the questions, if not all, assumes that any tested person has no prior […]
Jump To Section

I took the IDRlabs.com 8 Values Political Test, and, much like most tests designed for unreflective responses, so as to get to the prejudices of a person, I was frustrated on these psychological goals as an educator and a researcher. Many of the questions, if not all, assumes that any tested person has no prior education and this factor would set prejudices and informed opinion on equal terms; in other words, the social psychologist is quite unconcerned about the intellectual context which is in play, for both the logic of the question and the framed thinking of the person. There is an assumption that summative political judgement can be arrived through statistical measurements with a minimum of written explanation on the subject of ideology and political theory, and then applied a label which aligns with a majority percentage. My argument is that any accuracy in the test would measure the prejudices that are arrived at in the political labels, which are more caricature than informative thinking on ideology and political theory. Informed thinkers do not fit the boxes that social psychologists are attempting to squeeze the person into.

When a person has an informed opinion, even affected in prejudice, there are greater nuances which the responder brings to the test. In other words, a responder in such cases will be reflective and critical on the generality of the question. The greater the expertise in the informed opinion, the greater difficulty that the responder can give in answering each question – yes, this is, itself, a general statement, and, please, critically question it; but I believe it holds well. A person who would find completing this kind of tests ‘a breeze’, and have no qualms in answering each question, possibly has no informed opinion, just prejudice.

Let’s take my completion of the IDRlabs.com 8 Values Political Test. There were 70 questions, and the following three sections is an analysis on where 1) I was neutralised in my response to the question; 2) I could fully disagree with the question; and 3) I could fully agree with the question. These are tests of the generality in the test language. In many of the questions I could only partially disagree or agree. A good design with the  IDRlabs.com 8 Values Political Test was it did allow you to place the marker into the middle of the disagree and agree coloured areas, which I believed to be a position of partiality and where I could not fully consent to disagree or agree.

1). Questions which are unfair in its stupid generality, assuming no expert knowledge of the area (maybe I did, maybe I did not):

2). The only general questions which had sufficient clarity to my thinking, so that I could fully DISAGREE were:

3). The only general questions which had sufficient clarity to my thinking, so that I could fully AGREE were:

At the end of the completion of the test, I had 10 questions (14.3%) where I was neutral, 14 questions (20.0%) where I could fully disagree, and 12 questions (17.1%) where I could fully agree. Out of 70 questions, this left 34 questions (48.6%) where there were partial disagreement and agreement, and I suggest this is where the greater sense of reflective and critical thinking occurred. Does this mean I am slightly below average on the greater sense of reflective and critical thinking? No, this is the number-crunching behaviourist fallacy. It is the’ idiotic’ view of those who think that numbers tells the truth on matters which are maximised on textual propositions (maximised in the weight of qualitative evidence and semantics).

The outcome of the test is where it can be revealed to miss-the-mark. Here are my results, according to the IDRlabs.com 8 Values Political Test. 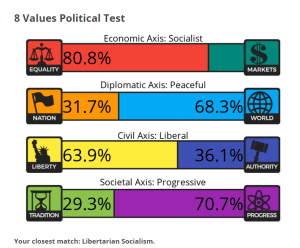 The test result says that my closest match is as a ‘Libertarian Socialist’. That is completely wrong. If I am forced to label myself I am a Social Liberal who is strongly opposed to Libertarianism.  Every undergraduate in political theory ought to know, in the times we are living (early 21st century), that ‘Socialism’ as a general term is problematic. It is not that socialism is ‘wrong’. It is that no one really knows in our current political climate what ‘Socialism’ is, and there are different historical versions with common principles. These principles are also shared among those who are not technically ‘Socialist’ in economic theory (or at least not sufficiently). As a Social Liberal, I share in values and principles of a flourishing society and communal cooperation. The label ‘Socialist’ is not offensive to me; it is just ignorantly misappropriated.

On the scaling results, the test is most likely accurate as an estimate in numeric value. I am for progress more than tradition. I value liberty more than authority, but then I am very concerned about the libertarian’s bloated skepticism towards authority.  I am certainly not an anarchist. I am surprised that I did not show even a higher score on peacefulness. I am also for defensive action which is clearly not aggression. It seems to me that you can defend yourself at ‘home’ without taking war to other countries. A simple logic and I do not understand why it is not talk up among hawks and doves. And yes, I am strongly for economic equality but that does not make me a socialist. Most citizens in modern western countries are for a mixed economy.  This leads straight to the problems in the textual propositions which tried to explain the score.

Idrlab.com On Economic Axis (for image illustration only)

The results read the “higher Equality scores believe the economy should distribute value evenly among the citizenship.” Yes, but what does that really mean? I do, in fact “support progressive tax codes, [and] social programs,” but ‘the devil is always in’ the economic detail. I have to admit I have no expertise in economic theory; and so on many of these questions there are a high degree of uncertainty, irrespective of my political prejudices. I do reject laissez-faire capitalism, but you would have to be politically unfashionable in modern democracies to support such a position (as it is technically defined).  On the new capitalist economy of privatization and deregulation, I might have been convinced in the 1990s, but now I am highly skeptical.

Where the results did get my own self-image generally right, it is in the diplomatic axis of nation versus globe.  I strongly do not “believe in an aggressive foreign policy, valuing the military, strength, sovereignty, and, at high values, geopolitical dominance.” However, while I believe “in a peaceful foreign policy, emphasizing diplomacy, cooperation, integration,” I reject most ‘one-world government’ narratives, and I am not above criticising the politics of the United Nations. 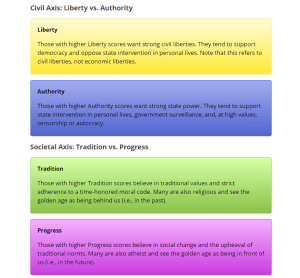 Idrlab.com On Civil & Social Axis (for image illustration only)

The civil and societal axis is conflated in its interpretation on liberty, authority, tradition, and progress. They are nice boxes for the purist ideologue. Not only is life too messy for boxes, but it is a blockhead approach to political theory. What does opposing “state intervention in personal lives” mean? The language itself is pre-judicious. Democracy is a system where the citizen has given authority to the government to intervene to protect liberties. Note that, in that last statement, there is no reference to ‘state intervention’ in the way the previous statement has been constructed.

There is no more confusion, particularly today, than on Tradition and Progress. Historians like Marilyn Lake (in Progressive New World, Harvard University Press, 2019) show how tradition and progress intertwined, in the last century, and particularly in campaigns for political reform.  That conflation still exists. Finally, in the great errors of the textual propositions to interpret the data, I am offended at the ignorance in the statement that that those who have high value on Progress “… [many] also [are] atheist and see the golden age as being in front of us (i.e., in the future).” I do not know if this is an implied criticism on utopias and a dislike of atheists from the designer, or just plain foolish ignorance? It presents as a caricature. There are probably as many atheists who are traditionalist and dystopian, as there who are not. Who really knows, unless there is a forced and comprehensive census on the question? And why bother, it is easier to reject caricature for appreciation that a person is a person, a complex being.

Numbers are not sufficient.

I felt constrained by the American assumptions that underlie this test. No other political culture emphasises libertarianism and market freedom in quite the same way. Tests like this do find you puzzling over how to crowbar your worldview into someone else’s.

I came out as ‘centrist’, right on 50/50 for nation/world, tending 60/40 or thereabouts in favour of equality, liberty and progress. I identify as a social democrat. I wondered if this test can even generate that label.