The Collapse of now too old ‘New Christian Right’

June 8, 2020
The signs might be early, but I believe we are seeing the alliance of the global “New” (so old now) Christian Right collapsing; the alliance at the very least. And I suspect that if the Christian Right reforms and creates a new movement, it will have to step away from the dominant theology from the […]
Jump To Section

It has been a bitter-sweet moment for me as a professional historian in the field. Since my early battle with the local Queensland version of the American New Christian Right, in 1988, I have been so frustrated at the distraction tactics used by local evangelical leaders.

At that time, the former Principal of Alcorn College, Col Warren, a Toowoomba pastor of the Uniting Church in Australia, brutally and publicly (verbally) dismissed me, in my youth, as someone who was a fool. The story was told to me by Rev. John Woodley, later to become the Queensland Senator for the Australian Democrats. What had happened was the Queensland Synod Office for Social Responsibility had put together a documentary package on the influence of R. J. Rushdoony’s Reconstructionism and dominant theology inside the Queensland evangelical church communities. I composed much of the work from research which would later form a part of my doctorate. The local evangelical Church communities rejected the message. The larger context was that the Synod had earlier closed down Alcorn College. There were financial considerations, but the truth, which the Synod would rarely admit, was there was a nasty battle within the Church, and the College was the centre for a militant and conservative evangelicalism that propagated creationist pseudo-science, right-wing conspiracy theories, and apocalyptic ‘mad-dog’ propaganda (not fit to be called ‘evangelism’). It is not to deny that better thinking also happened in the college, but it was politically and spiritually a mess. I was one of the college students, and I will admit that at that time I contributed to the mess. 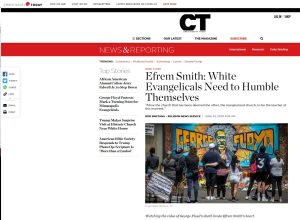 The Collapse Of The New Christian Right

Col Warren provided me with an institutional understanding of Church history and the history of Church-State relations. When I undertook history fields of learning at university, I had to untangle the propaganda from those earlier history lessons; and if you think that my comments are propaganda, the same criticism are really what the faithful Calvinist sociologist, Jacques Ellul (1965), had argued. Of course, Warren predicted this, during my college days, and stated that the true believers ought to see their future university courses as full of liberal falseness. This is why places like Queensland have so many evangelical pastors who are so ignorant about what happens in the larger world. Mind you, much respect has to be given to the evangelical pastors who ignored or rejected the mad and dangerous acclamation from the dominant theologians. And these ‘left-thinking’ or progressivist Christians were the ones who taught me what social justice meant.

The problem is that the Church as an institution is not often honest about its history, which is why it is important to pause and consider the contemporary history. We have a situation where a great televangelist ally of the (old) New Christian Right, for forty years, Pat Robertson, rebuked the American President for making statements and posturing; exactly as the same on the Christian Right doctrines and its posturing. It is a great moment of shock for the global evangelical world. It does have a gradual history, however, where the Right has continually lost its arguments from against the Evangelical Left, accumulating with the great and recent rebuke delivered by the retiring editor of Christianity Today. It is no surprise to us who critically read (and enjoyed) George Marsden’s work, Reforming Fundamentalism (1995). Christianity, let alone its evangelical version, has had to continually reform itself as the world changes. However, conservative thinkers, ideologically, suffer the obstructiveness in their thinking on such issues. And so obstruct the change, tackling the heavy need for social justice in practice. As Hegel stated, “The owl of Minerva takes its flight only when the shades of night are gathering”. Hegel also stated:

[“Despise only understanding and science,

So you have surrendered to the devil

and must go to the bottom.”]

And now we have a situation where Christianity Today is generally moving against Franklin Graham’s obstinate and solid support for Trump, as the circus falls apart. Graham did have a point about what his father’s views might have been today, but that has to do with the fact that conservatives always lose the truth on what is happening in the world and are so blind-sighted to what is happening in the world.  The Christians fail to hear the prophetic words of Jesus.

I wonder if Rev Warren had a problem with you because you threw a mock Molotov cocktail through the window into the busy lecture room.

Indeed, I did. Which strengthens my argument about the aggressiveness of the New Christian Right. In 1980-1982 I was of the same mindset, and it was not until the early university years my thinking changed, and why throwing mock Molotov cocktail through the window into the busy lecture room is not a good idea, and only adds to the poor educationalist performance — which is the context, it was a role play lesson, and, yes, I took it too far. However, Warren introduced me to a whole erroneous cultural-history war narrative. See https://www.academia.edu/50114448/Finding_Peace_from_the_Culture_History_War_A_Historiographical_Message_for_the_Times