The Inner Level and The Sphere of Wordviews

July 22, 2019
“…development can be adjusted to experience… …What matters is the quality of social relationships. Early development is shaped by whether we find ourselves growing up in a world where we must be ready to fight for what we can (except when deferring to dominants), learning not to trust each other because we are all rivals […]
Jump To Section

“…development can be adjusted to experience…
…What matters is the quality of social relationships. Early development is shaped by whether we find ourselves growing up in a world where we must be ready to fight for what we can (except when deferring to dominants), learning not to trust each other because we are all rivals for scarce resources, or whether we find ourselves living in a society where we depend on co-operation and reciprocity, where empathy and trust are important. Each system requires a different social orientation, a different kind of emotional and cognitive development…”

The historiography, historical geography and sociology is coming together in my work from the social psychology of Wilkinson and Pickett. Traditionally, particularly in the German historiography, history is about institutions, and that German historiography centred in Weltanschauung, from Wilhelm von Humboldt and Wilhelm Dilthey as the historians or linguistic-historiographers; but originally thought-out by philosophers Immanuel Kant and Georg. W.F. Hegel. Philosophers and historians of the last few centuries have continued in this conceptual frame, or I should say ‘frames’, as there were different types of worldviews as well as multiple worldviews within the typology. Institutions dominate the discourse but communities, and individuals of original thought or of synthetic systems, are not located outside the frame(s). Here is how I am re-imagining my work as historiography,  and as historical geography and sociology — the sphere of worldviews, mapped in culture and landscape: 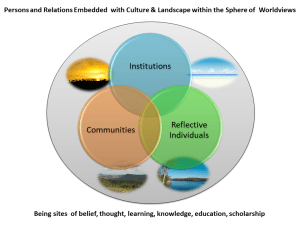 Illustration: The Sphere of Worldviews

The image visually represent what I am aiming at in the Stage 7 of the https://mappingbrisbanehistory.com.au/

In the mapping project, I am mapping local sites of belief, thought, knowledge,education, and scholarship, which emerge in forms (types and ideologies) of worldviews, but not merely as institutional histories, or for that matter, collected but distinct biographies of individuals and their communities. What frustrates me, as the philosopher, the philosophic or socio-intellectual historian, is how little regard historians pay attention to the ‘relation’, and in particular, in the relationship of the overlaps. The environmental and cultural histories are layered in the various relations of institutions, communities, and individuals, but we often paper-over those relationships in the generality of our conclusions, which, of course, are the subjects themselves of worldview formation.

Perceiving the culture-landscape dynamic in this way is a key reason why historians need to pay attention to the various arguments of philosophers, but in particular to contemporary debates on personal identity, and the different layering between ‘Self’ and ‘Other’. The studies are wide-spreading in our times (’emergence’) and roots down into cognitive psychology and spans out to cosmology. Here again, as I have said, time and time again, the concept of heritage fails the historian with its inferences into materialistic antiquarianism, the curse of the Midas Touch. We need to defy the ‘paper’ bureaucrats in their utilitarian control — think abstractly and think creatively, but aware to the existences of the ‘relation’, in particular in overlaps of ‘ways of life’ formed in Weltanschauung.